Indium tin oxide (ITO) crystal structure
Indium tin oxide (ITO) is an n-type semiconductor formed by doping In2O3 with tin. The crystal structure is In2O3. The In2O3 structure has two forms, one is the cubic ferromanganese structure and the other is the hexagonal corundum structure. The cubic ferromanganese structure is the most common In2O3 structure, as shown in Figure 1. When tin oxide is doped into indium oxide to form an indium tin oxide solid solution, a highly degenerate n-type semiconductor is produced, in which a certain number of In3+ positions are replaced by Sn4+, resulting in a large number of point defects in the ITO lattice At the same time, a large number of free electrons are generated. Point defects and free electrons can act as carriers under the electric field, so it shows excellent conductivity. 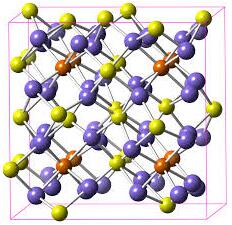 ITO thin film process
The application of ITO in various fields revolves around its excellent properties of transparency and conductivity. The optical properties of ITO films are mainly affected by two factors: the optical band gap and the plasma oscillation frequency. The former determines the spectral absorption range, and the latter determines the spectral reflection range and intensity. In general, ITO has higher absorptivity in the short-wavelength region, higher reflectivity in the long-wavelength range, and highest transmittance in the visible light range. Taking 100nm ITO as an example, the average transmittance in the 400-900nm wavelength range is as high as 92.8%.

The performance of ITO film is mainly determined by the preparation process, and heat treatment is often used as a means of auxiliary optimization. In order to obtain an ITO film with good conductivity, high transmittance, and flat surface morphology, it is necessary to select appropriate deposition methods and optimize process parameters. Common coating methods include electron beam evaporation and magnetron sputtering.

The main principle of electron beam evaporation: In a high vacuum environment, the high-energy electrons emitted by the electron gun will bombard the surface of the ITO target material under the action of the electric field and magnetic field to convert the kinetic energy into heat energy, and the target material will heat up and become a molten state or evaporate directly. , ITO film is deposited on the surface of the substrate.

The reason why liquid crystal displays can display specific patterns is mainly that the transparent electrodes on the conductive glass are etched into electrodes of specific shapes. After appropriate voltage signals are applied to these electrodes, the liquid crystal molecules with dipole moments are specified under the action of an electric field. Arrangement of the aspect, and then show the pattern corresponding to the electrode wavelength. At present, ITO has the best light transmittance and conductivity of transparent electrodes of liquid crystal displays, and it is easy to etch fine patterns in acid.

The resistive touch screen, when the surface is touched, bends downwards, and allows the two layers of ITO coating spaced below to contact each other and connect the circuit at this point, the resistance changes, and signals are generated in both X and Y directions, and then Send touch screen controller.

The surface capacitive touch screen only uses a single layer of ITO, when a finger touches the surface of the screen, a certain amount of electric charge will be transferred to the human body. In order to recover these charge losses, charges are replenished from the four corners of the screen, and the amount of charge replenished in each direction is proportional to the distance of the touch point, and the position of the touch point is calculated.

The projected capacitive touch screen led by IPHONE uses multi-layer ITO layers to form a matrix distribution. The X-axis and Y-axis cross-distribution are used as the capacitive matrix. When a finger touches the screen, the X and Y axes can be scanned to detect the touch The change in capacitance at the touch position can be used to calculate where the finger is. Based on this architecture, the projected capacitor can achieve multi-touch operation.

ITO development status
For a long time, the core technology of ITO target materials has been controlled by Mitsui, Tosoh, Hitachi, Sumitomo, JX, Samsung Corning, Umicore and other large companies, and their atmospheric sintering technology has been relatively mature.

my country is the world’s largest demand country for ITO targets, accounting for 25% of the world’s demand. As an important raw material for display panels, although ITO targets have entered the Red Sea market, the localization rate is not high. Before 2019, about 90% of ITO targets need to be imported.

Although there are more than 20 target companies in China, the progress is not smooth, and mass supply is generally not available. Until 2017, the domestically produced ITO target products and technical level have greatly improved, gradually catching up with the international leading level. Domestic representative companies include Pioneer Group, Yingri Technology, Jinglian Optoelectronics, and Oulai Targets.

As OLED replaces LCD to become the mainstream of display technology, the market demand for ITO target materials may no longer grow at a high speed, turning to a steady development trend.

On the other hand, the price war in the ITO target market has been going on for a long time. Although there is a trend of rising prices in the market at this stage, there are not a few domestic companies deploying ITO target business, and market competition pressure will become increasingly fierce.