The main crystal phase of the silicon carbide powder selected in the experiment is 6H-SiC, the average particle size is about 9um, and the oxygen content is 0.48wt%. Carbon source: The carbon sources used are SO type graphite and FR6600 carbon black. Silicon source: silicon powder, purity 99%. Organic binder: N660 phenolic resin.

3.1 The effect of degumming temperature on the porosity of the green body

The degumming process is an important process that affects the sintering process. In order to obtain a suitable degumming process, TG-DTA analysis was carried out on the reaction sintered silicon carbide ceramic body, as shown in Figure 1.

3.2 The effect of heating rate on the microstructure of silicon carbide ceramics

3.3 Influence of the amount of silicon added on the bulk density and metallographic structure of silicon carbide ceramics

In order to investigate the effect of the amount of silicon added on the bulk density and metallographic structure of silicon carbide ceramics, the green body with a density of 1.95 g/cm3 was subjected to reaction sintering under different amounts of silicon, the sintering temperature was 1700 ℃, and the temperature was kept for 2 h. .

After testing, when degumming at 800 ℃ for 2 hours, the heating rate is 1.0 ℃/min, and the mass ratio of silicon to silicon carbide green body is 0.9, the bulk density of the prepared silicon carbide ceramics is 3.09 g/cm3, showing good performance. Mechanical properties, its Vickers hardness, flexural strength and fracture toughness are 26.82 GPa, 388 MPa and 4.49 MPa·m1/2, respectively. 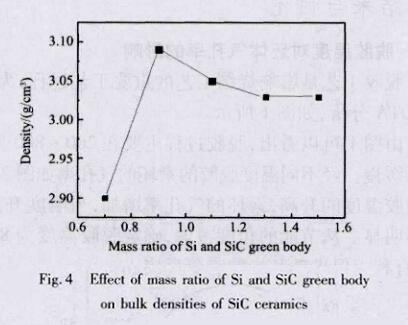 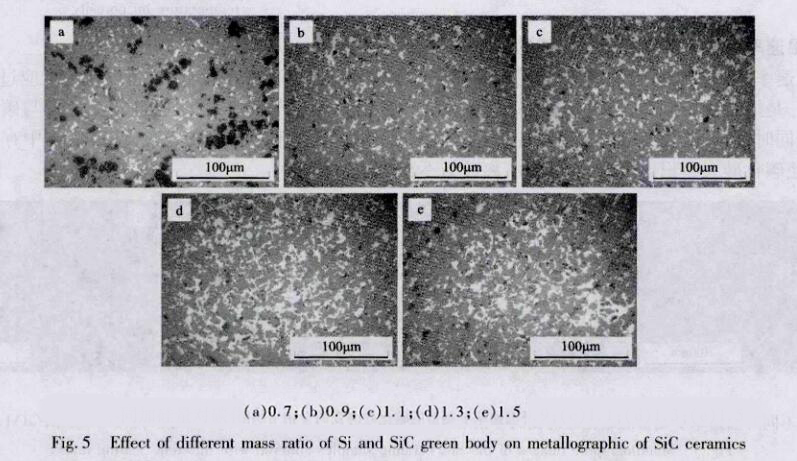 3.4 Influence of refiring on the properties and microstructure of silicon carbide ceramic products

In mass production, some products have the problem of insufficient silicon infiltration, and such products are called substandard products. The bulk density of unqualified products is low, and the surface is usually green, and these products are generally distinguished by visual inspection and bulk density testing. The samples were re-fired, and the heating system of the re-fire was the same as the first sintering. By observing the effect of reburning times on product performance, it can be found that one reburning is beneficial to improve the bulk density and mechanical properties of unqualified products. However, the hardness, flexural strength and fracture toughness of the samples decreased to varying degrees after the second refiring.

In this paper, the effects of sintering process parameters such as degumming temperature, silicon addition amount, heating rate and refiring times on the properties and microstructure of reaction sintered silicon carbide ceramics were studied. The conclusions are as follows:

(1) When the degumming temperature is 800 ℃, the silicon carbide blank has higher porosity (30.23%) and more silicon infiltration channels, which is conducive to promoting the full reaction of carbon and silicon;

(4) Refiring the unqualified silicon carbide ceramic products with insufficient siliconization. One refiring can effectively improve the bulk density and mechanical properties of the product, but the second refiring will cause the grains of the sintered body to coarsen, resulting in Mechanical properties decreased.

Selection of sintering equipment: RVS-S silicon carbide reaction sintering furnace provided by SIMUWU is an excellent product for handling silicon carbide vacuum sintering process. The product has the characteristics of good temperature uniformity, high temperature control accuracy, stable sintering, and fully automatic control. SIMUWU provides a professional team of engineers who can solve various problems encountered in the production process, reduce the cost of trial and error in production, and are committed to giving customers the most convenient and fast experience. 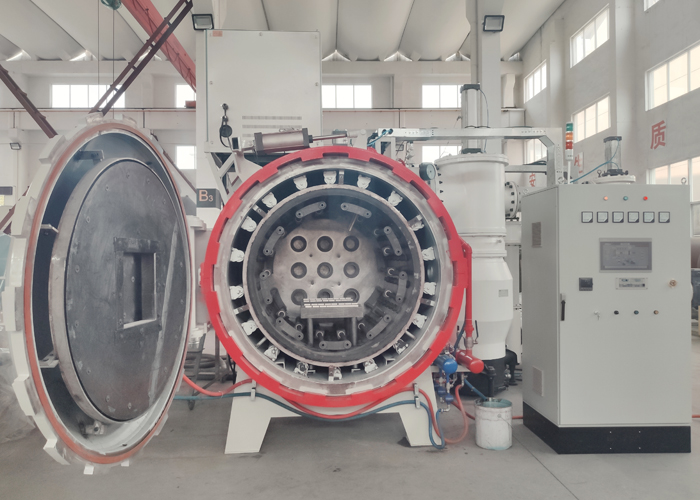