The material of carburizing work-piece is generally low carbon steel or low carbon alloy steel (carbon content is less than 0.25%). After carburizing, the chemical composition of the steel surface can be close to that of high carbon steel. After the work-piece is carburized, it must be quenched to obtain high surface hardness, high wear resistance and fatigue strength, and to maintain the toughness of the core after quenching of low-carbon steel, so that the work-piece can withstand impact loads. Carburizing process is widely used in mechanical parts such as aircraft, automobiles and tractors, such as gears, shafts, camshafts, etc.

The main mechanism is to let the steel surface receive the most various loads (wear, fatigue, mechanical load and chemical corrosion), and achieve high surface hardness, high wear resistance, fatigue strength and corrosion resistance by infiltrating elements such as carbon. , without having to process the entire material through expensive alloying or other complex processes. This can not only replace some of the more expensive high-alloy steels with low-cost carbon steel or alloy steel, but also maintain the strength and toughness of the low-carbon steel in the core after quenching, so that the work-piece can withstand impact loads. Therefore, it is fully in line with the direction of energy saving, consumption reduction and sustainable development.

Solid carburizing is to put the work-piece and solid carburizing agent (composed of charcoal and accelerator) together in a closed carburizing box, put the box into a heating furnace and heat it to the carburizing temperature, and keep it for a certain period of time to make the activated carbon atoms One of the earliest carburizing methods for infiltrating the surface of work-pieces.

Low carbon steel carburizing: The material of carburizing parts is generally low carbon steel or low carbon alloy steel (carbon content is less than 0.25%). Quenching must be carried out after carburizing to give full play to the beneficial effects of carburizing. The surface microstructure of the work-piece after carburizing and quenching is mainly high-hardness martensite plus retained austenite and a small amount of carbides, and the core structure is low-carbon martensite with good toughness or a non-martensite-containing structure. However, ferrite should be avoided. Generally, the depth of carburized layer ranges from 0.8 to 1.2 mm, and it can reach 2 mm or more during deep carburization. The surface hardness can reach HRC58~63, and the core hardness is HRC30~42. After carburizing and quenching, compressive internal stress is generated on the surface of the work-piece, which is beneficial to improve the fatigue strength of the work-piece.

Therefore, carburizing is widely used to improve the strength, impact toughness and wear resistance of parts, thereby extending the service life of parts
1. One-time heating, quenching, low temperature tempering, carburizing temperature 820～850℃ or 780～810℃
Features: For those with high requirements on the strength of the core, quenching at 820-850ºC is used, and the core structure is low-carbon martensite; for those with high surface hardness, the grains can be refined by heating and quenching at 780-810ºC
Scope of application: It is suitable for carbon steel and low alloy steel work-pieces after solid carburizing. Coarse-grained steel with thick gas and liquid carburizing, some work-pieces that are not suitable for direct quenching after carburizing, and parts that need to be machined after carburizing.

3. Secondary quenching and low temperature tempering
Features: The first quenching (or normalizing) can eliminate the infiltration layer network carbide and refine the core structure. The second quenching mainly improves the structure of the infiltrated layer, but when the performance requirements of the core are higher, the core should be quenched above AC3
Scope of application: It is mainly used for important carburized work-pieces with high requirements on mechanical properties, especially for coarse-grained steel. However, two high-temperature heatings are required after carburizing, which increases the deformation and oxidative decarburization of the work-piece, and the heat treatment process is more complicated.

5. Direct quenching and low temperature tempering
Features: The grain of steel cannot be refined. The quenching distortion of the work-piece is large, the surface of the alloy steel carburized part has a large amount of retained austenite, and the surface hardness is low
Scope of application: simple operation and low cost. Pit furnaces are used to process parts that are not subject to deformation and shock loads, and are suitable for gas carburizing and liquid carburizing processes

Features: It can reduce the quenching distortion of the work-piece, the amount of retained austenite in the carburized layer can also be slightly reduced, the surface hardness is slightly increased, but the austenite grains have not changed

Scope of application: simple operation, small oxidation, decarburization and quenching deformation of work-piece. Widely used in various work-pieces made of fine-grained steel.
Common defects
1. Too high carbon concentration
1. Causes and hazards: If the carburizing is heated rapidly, the temperature is too high, or a new carburizing agent is used in solid carburizing, or too much strong catalyzing agent is used, the carburizing concentration will be too high. As the carbon concentration is too high, massive and coarse carbides or network carbides appear on the surface of the work-piece. Due to this hard and brittle structure, the toughness of the carburized layer drops sharply. In addition, high-carbon martensite is formed during quenching, and grinding cracks are prone to occur during grinding.

2. Methods of prevention
① It cannot be heated rapidly, and it is necessary to use an appropriate heating temperature so as not to make the grains of the steel grow. If the grains are coarse during carburizing, the grains should be refined by normalizing or twice quenching after carburizing.
②Strictly control the uniformity of furnace temperature and do not fluctuate too much. Special attention should be paid to solid carburizing in the reverberatory furnace.
③ When solid carburizing, the carburizing agent should be used in the ratio of new and old. It is best to use 4-7% BaCO3 as the infiltrating agent, and do not use Na2CO3 as the infiltrating agent.

Hexagonal cracks appear on the surface. This is because the surface of the hard grinding wheel is excessively ground and heats up. It is also related to insufficient heat treatment and tempering and excessive residual internal stress. After etching with acid, any defective parts are black, which can be distinguished from those without defects. This is the heat tempering produced during grinding. The reason for the transformation of the horse body into the troostite structure. In fact, cracks can be seen with the naked eye after grinding.
⒉ Methods of prevention:
①After quenching, it must be fully tempered or tempered many times to eliminate internal stress.
②Use a soft or medium alumina grinding wheel with a grain size of 40~60, and the grinding feed rate is not too large.
③When grinding, open the coolant first, and pay attention to sufficient cooling during the grinding process. 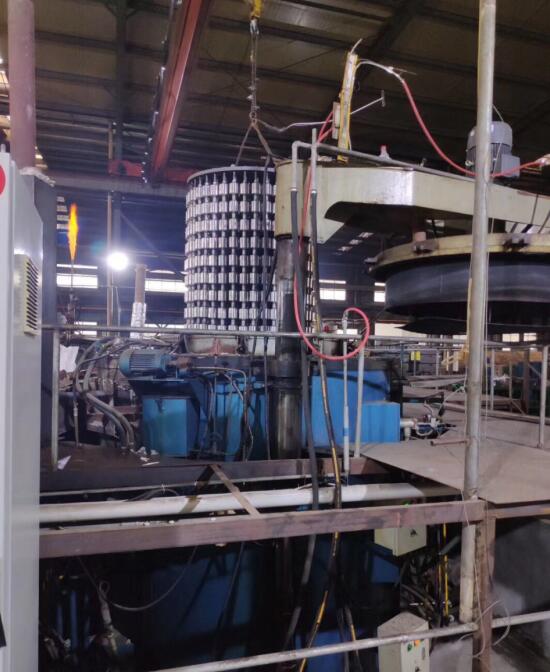