The oxide film Al2O3 on the surface of aluminum alloy is very stable, its melting point is above 2000 °C, and it is difficult to decompose even under high vacuum. Magnesium has a close-packed hexagonal crystal structure and has good activity, which can play a favorable role in vacuum brazing. Since it was found that magnesium vapor can promote the fluidity of solder in vacuum brazing, the method of using magnesium as an activator has become the formal process of conventional vacuum aluminum brazing. There are many theories about the role of magnesium vapor. It is generally believed that the vapor pressure of magnesium is high and the boiling point is low. The vapor volatilized in the vacuum can remove the residual oxygen and moisture in the vacuum, thereby reducing the partial pressure of oxygen and improving the effective vacuum degree; magnesium vapor On the one hand, it protects the surface of the oxide film cracks, and on the other hand, it also penetrates into the base metal surface under the film through the cracks to form a low-melting Al-Si-Mg alloy with the diffused silicon and melts, thereby destroying the oxide film and the base metal. , to wet and spread the molten solder along the aluminum surface.

An appropriate amount of magnesium can not only remove the oxide film, adsorb the residual moisture in the furnace to reduce the oxygen partial pressure, but also promote the flow of the brazing filler metal and supplement the burning loss of the magnesium element in the alloy, but excessive magnesium can also cause corrosion and corrosion of the surface of the parts. Contaminate the vacuum chamber. In order to reduce the pollution of magnesium vapor to the furnace wall, various methods of adding magnesium can be used. Improper placement of magnesium will not work. Once the magnesium particles meet the aluminum, they will form Al-Mg low melting point eutectic and melt, leaving obvious pits on the base metal and scrapping the workpiece. Using a craft cover is a very practical method, but it is also subject to certain limitations. Because it prolongs the heating time of the parts, the temperature difference between the upper and lower parts of the parts increases during cooling, which causes additional deformation of some components, and makes the gas quenching process impossible. The method of pumping the furnace body to 10-3 Pa vacuum nitrogen and magnesium preservation recommended by some literatures is only suitable for small equipment, not suitable for large equipment with larger size. Bares41 proposed that it is feasible to introduce magnesium vapor in a timely manner during brazing, and also proposed to monitor the quality of magnesium vapor in the furnace in his patent. It has also been proposed to add magnesium to Al-Mg low melting point alloys. Therefore, in order to grasp the appropriate amount of activator in vacuum brazing, the shear strength of brazed joints obtained by placing different magnesium masses in a unit volume was compared through experiments, and the phase structure was analyzed, and the change of magnesium with holding time was quantitatively described. The amount of volatilization.

Select high-purity magnesium ingots, machine them into a certain shape, and put them into special containers. The test base material is 3A21 aluminum alloy. Specimen gauge

Different magnesium masses were placed in the furnace, and the specimens were vacuum brazed, and then the mechanical properties were tested and the metallographic structure was analyzed. The main welding parameters are shown in Table 1.

2.1 Influence of magnesium on joint strength 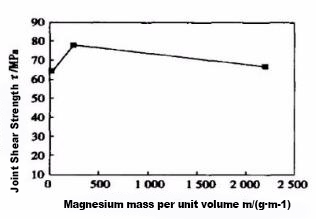 The corresponding photos of the metallographic structure of the brazed joint are shown in Figure 2, Figure 3 and Figure 4.

It can be seen from the phase diagram of Al-Mg-Si alloy that the strength of the joint increases with the proper increase of magnesium mass. But when changing the ratio of magnesium to silicon content

has a significant impact on performance. Figure 2, Figure 3, Figure 4 are photographs of the metallographic structure of the joint with three different magnesium masses per unit volume. The width of the brazing seam in the joint is obviously different. The average width in Figure 2 and Figure 4 is about 0.11 mm, while in Figure 3 It shows that its average width is about 0.06 mm, and its shear strength is also the highest among the three. This is because the main strengthening phase of the brazing seam is MgSi precipitated along the grain boundary, and its magnesium and silicon content ratio is 1.73:1. If the quality of magnesium is too large or too small, the solubility of the Mg2Si phase in aluminum will be changed, thereby reducing the strengthening effect. 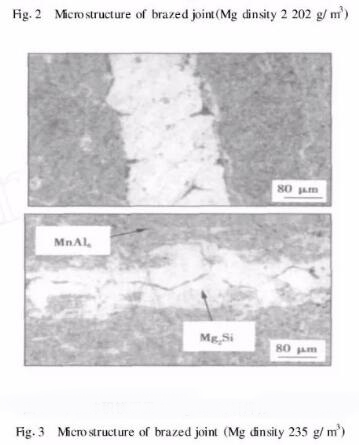 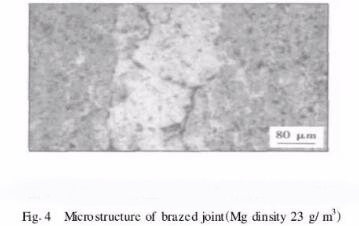 2.2 The relationship between solid magnesium volatilization and temperature and time

According to theoretical calculations, the vacuum degree required for the decomposition of metal oxides is generally extremely high, while the vacuum degree actually used in brazing is much lower than these values. Therefore, this process is obviously not the main demembrane pathway. For most metals and alloys, the self-decomposition of oxides cannot be used to achieve the purpose of removing the film. The relationship between the volatilized mass of solid magnesium and the holding time in a vacuum environment is shown in Figure 5. Figure 5 shows the effect of vacuum brazing holding time on the volatilization quality of magnesium, where the time refers to the holding time above 325 °C at which magnesium begins to volatilize. It can be clearly seen from the figure that the volatilized mass of magnesium that is placed increases slowly with time. Since the volatilization temperature of magnesium in the vacuum brazing process is 325 °C (Fig. 6), the temperature of rapid volatilization reaches 530 °C. According to the residence time of vacuum brazing products above 325 °C, the amount of magnesium volatilization can be quantitatively obtained, which provides a scientific basis for pre-welding assembly, and avoids placing too much or too little magnesium, which will affect the performance and performance of the brazing seam. Appearance shaping has a negative effect. 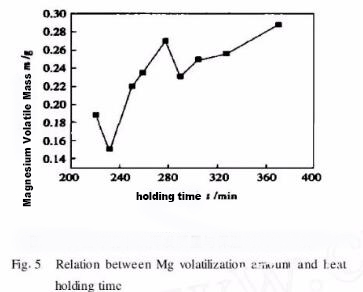 2.3 Influence of magnesium on interfacial tension

The adsorption of liquid metal during vacuum brazing of aluminum and aluminum alloys will reduce the strength of the oxide film. Due to the difference in linear expansion coefficients, the oxide film will be broken and dispersed and removed. The alloying element magnesium contained in the solder is enriched at the interface and turns the alumina into a low-valence oxide, reducing its compactness, thereby facilitating its crushing and removal. According to the principle of minimum free enthalpy, if a component can reduce the interfacial tension, the component will be adsorbed to the interface, so that the content of the surface phase of the component is greater than that of the bulk phase. Conversely, if a component increases the interfacial tension between the solid and liquid phases, it will be repelled away from the phase interface, so that the surface phase content of the component is smaller than the bulk phase content. The former is “positive adsorption” and the latter is “negative adsorption”.

In the process of aluminum brazing, because the brazing filler metal is an Al-Si-Mg alloy, magnesium will be selectively adsorbed on the phase interface. live

The active element magnesium content in the solder is very small, generally 1.5%~2%, but it can have a strong positive adsorption effect, making it enriched in the phase interface, thereby greatly reducing the interfacial tension and improving the liquid solder. The wetting process of the base metal, so this characteristic is usually used in the process of vacuum brazing, and a certain quality of solid high-purity magnesium is added in an appropriate way to improve the performance of the brazed joint.

(1) Comparing the shear strength of brazing joints under three different magnesium masses, when the mass of magnesium per unit volume reaches 235 g/m3, the strength is the highest, which is 78 MPa.

(2) The metallographic structure of the joint under different magnesium quality was analyzed. The main strengthening phase in the structure was Mg2Si, and the quality of magnesium per unit volume reached

(3) By obtaining the residence time of different products above 325°C, the preset magnesium quality can be quantitatively grasped.

The importance of brazing holding time