With the rapid development of the air-conditioning industry, there is an increasing demand for new heat exchangers that are efficient, compact and energy-saving. In particular, the traditional fluorochlorofluorocarbon refrigerants will be replaced with fatal defects in terms of environmental protection, and the working pressure of new alternative refrigerants such as carbon dioxide is very high, which requires the heat exchanger to have sufficient pressure resistance. The multi-channel parallel flow heat exchanger has the characteristics of compact structure, light weight, high heat exchange efficiency and strong pressure resistance, and has become the most promising form of heat exchanger at present. The parallel flow heat exchanger is composed of perforated flat tubes and corrugated louver fins. There are collectors at both ends of the perforated aluminum alloy flat tubes. There are spacers in the collectors. The number of tubes in each section is different, showing a gradual decreasing trend. , This variable flow design can make reasonable use of the effective volume of the heat exchanger and improve the heat exchange capacity. 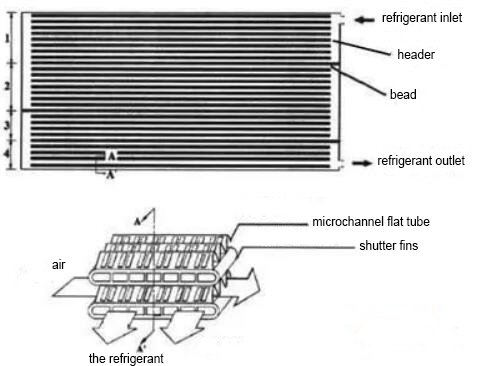 The porous flat tubes used for the production of parallel flow heat exchangers are obtained from aluminum alloys through an aluminum extrusion process. Considering the structural complexity of the porous flat tubes, the split-flow combined die is generally used to extrude the aluminum ingot billets. The split-flow combined mold can ensure uniform wall thickness, and has the advantages of simple production equipment and low production cost. The figure below shows the extrusion die for the manufacture of perforated flat tubes, which mainly includes extrusion cylinders, shunt holes, shunt bridges, mold cores, working belts, and welding chambers. 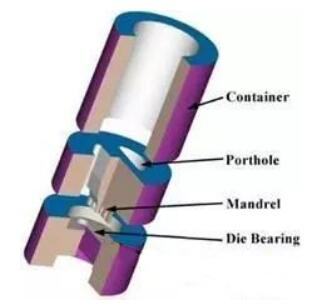 The metal flow process in split die extrusion is divided into split, welding and forming stages. In the shunt stage, the material is divided into two strands and enters the shunt hole; in the welding stage, the material enters the welding chamber and fuses into one under high temperature and high pressure; in the forming stage, the material is extruded from the working belt after filling the welding chamber. The micro-channel tube has many closed sections and many welding surfaces, and the tube is under alternating pressure in the refrigeration system. Therefore, the forming quality of the welding surface has become one of the key issues in the extrusion of multi-channel tubes. It can be seen from the numerical simulation that the material first flows into the complex cavity composed of the welding chamber and the mandrel in the whole welding process, and the two strands of materials contact around the mandrel under the action of the extrusion force. Under the action of high pressure, the two strands of material are welded together in a very short time.

Split die extrusion die design is a decisive issue in the production of microchannel flat tubes. The extrusion cylinder can be divided into flat die and cone die according to the size of its die hole and die angle. The traditional profile extrusion generally adopts a flat die, that is, the die angle is 90°. This is because there will be a dead zone in the metal flow when the flat die is extruded, and the natural die angle formed by the metal flow is generally 40°~70°, so the oxides, dirt and oil on the surface of the ingot are left in the dead zone. The surface quality of the extruded products produced in this way is good, but the extrusion force is large and the energy consumption is large.

The shunt hole is the channel for the metal to flow to the welding chamber. The number, shape and shape of the shunt hole have a great influence on the quality, extrusion force and die life of the extruded product. The number of shunt holes is generally as small as possible to reduce welds, increase the area of ​​shunt holes, and reduce extrusion force. The shape of the shunt hole should be as close as possible to the shape of the profile, and at the same time to ensure that the mold has sufficient strength, so the fan-shaped shunt hole is generally used. The arrangement of the shunt holes should keep the geometric similarity with the product as much as possible, neither too close to the edge of the mold nor too close to the center of the extrusion cylinder; the shunt bridge is used to support the mold core, and its structure and size have an impact on the metal flow rate, welding quality and mold strength. The mold core, also known as the tongue, is used to stroke the shape and size of the inner cavity of the profile; the welding chamber is the space where the shunt hole is divided into several strands of metal and re-welded together, and the mold hole is used to form the external status of the cavity. and size. There are working belts on both the die core and the die hole, and the working belt part determines the shape and dimensional accuracy of the profile.

Although the traditional flat-die split can make the surface quality of the product good, the extrusion force becomes very large, and it is easy to cause elastic deformation and deflection of the mold core and the working belt, which will seriously affect the final shape and dimensional accuracy of the product. What’s more, if the extrusion force is too large and exceeds the tensile strength of the core material, cracks will occur in the core, thus affecting the service life of the die.

In order to shorten the development cycle and adapt to the design of different heat exchangers, a dieless bending technology came into being. The dieless bending die cancels the bending die in the traditional bending process, and is mainly composed of two clamping dies, one of which is fixed, and the other is to bend the workpiece into the target shape according to a certain movement trajectory under the control of the computer. The moldless bending technology can realize the bending process of any bending radius because there is no bending mold, which improves the versatility of the bending equipment and reduces the cost of the mold trial. For the heat exchanger, because there is no direct contact between the bending die and the fins, the structure of the heat exchanger is no longer limited, and the possibility of the fins from being unstable and falling is suppressed from the source. In order to increase productivity and reduce subsequent assembly steps, two layers of heat exchangers can also be stacked together for a single bend.

Under the background and pressure of increasing energy conservation and environmental protection requirements, parallel flow heat exchangers have become a very promising heat exchanger in the air conditioning and refrigeration industry, and are developing towards microchannels and enhanced heat exchange special-shaped structures. This puts forward higher requirements for the related forming processing technology. Since the equivalent diameter of the flow channel of the porous flat tube is getting smaller and smaller under the requirement of strengthening heat transfer, the shape and dimensional accuracy of the product are very sensitive to the deformation of the mold. In order to reduce the extrusion force and reduce the possibility of mold deformation , the development of a new mold structure has become a new way to improve the manufacturing level of porous flat tubes. Efficient and compact air conditioning systems require the heat exchanger to be subjected to secondary bending. The degree of tube deformation after secondary processing has an important impact on the overall heat transfer performance of the heat exchanger. Evaluating the forming quality of flat tubes after bending It is of great significance to improve the performance of the heat exchanger and the initial structure design of the flat tube. In order to reduce development costs and improve productivity, the use of CNC dieless bending technology can achieve flexible manufacturing of heat exchanger bending, and reduce the probability of workpiece forming defects. 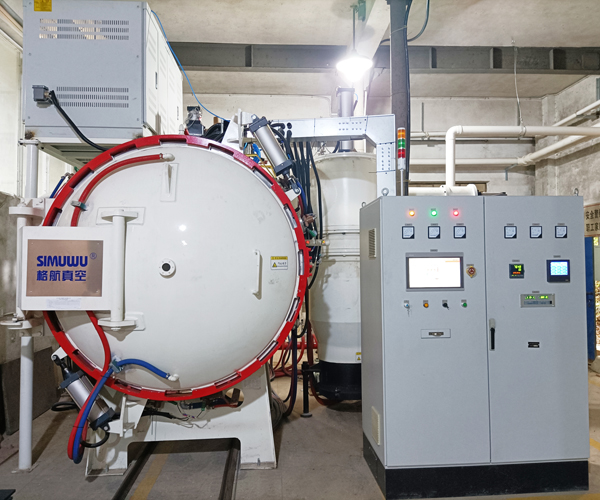