HI3 steel is the American steel corresponding to the Japanese steel brand SKD61, and China’s 4CrSMoSiV1 chemical composition is basically the same, it is a chromium hot forging die steel, with high strength and toughness, thermal fatigue and thermal cracking resistance, as well as good oxidation resistance and thermal stability.At the same time, due to the high Cr content, so there is good hardenability, and the addition of 1.2%~1.5% of Mo, higher hardenability, so the size of the larger mold quenching can also achieve the surface and core more uniform hardness.The addition of silicon and alum greatly improved its thermal fatigue resistance, high temperature oxidation resistance and secondary hardening effect, and increased thermal stability.In this paper, vacuum quenching, tempering and surface ion nitriding heat treatment were carried out to provide reference for practical production.

The shape of H13 steel hot forging die is shown in the figure, and the thickness of section is 120mm.Working temperature of 300 C “left and right sides, maximum instantaneous temperature of 500 C, need good high temperature strength and abrasion resistance, especially in the modern fast automatic forging production lines (the continuous automatic production, mold interval to use for each station, each 4s forging forming, clearance time for short spray cooling and lubrication) applications, the mold corrosion resistance thermal fatigue, thermal shock resistance and impact toughness properties such as higher requirements are put forward. According to the failure modes of the mold, which are mostly cracking damage and thermal wear due to thermal fatigue, and the characteristics of good toughness of H13 steel, and because of the simple structure of the mold, the final heat treatment hardness is determined to be 48~ 50HRC, so as to ensure good comprehensive performance at high temperature. 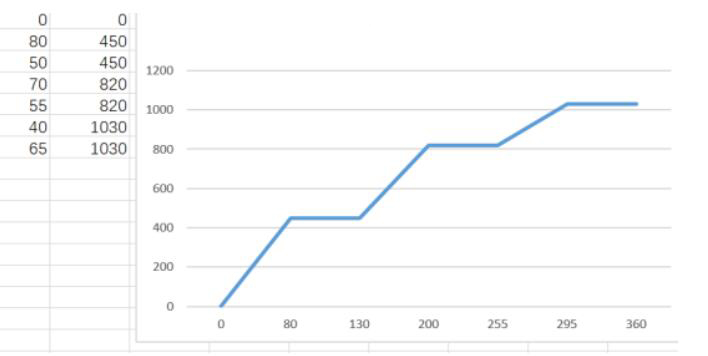 H13 hot forging die steel was processed in SIMUWU VOGQ-8812-2 vacuum oil quenching furnace through the following experiments. Before the mold was loaded into the furnace, the oil on the surface of the mold was cleaned first and put into the furnace after drying.The quenching process requires oil cooling for 40min.After quenching, the martensite structure of H13 steel is M+ A small amount of flake M+ A small amount of residual a. this structure is brittle, and the mold has large structural and thermal stresses after quenching.In order to prevent the occurrence of cracking after quenching, should be timely tempering, not to let the mold cold to the ambient temperature. Theoretically, the insulation time of tempering heating should be 2.4 min /mm according to the thickness of the workpiece, or 2 hours after the heart is warmed.After tempering, the hardness is generally controlled within the range of 3 HRC.In the tempering process, vacuum is pumped first and then high purity nitrogen is charged to positive pressure, and a circulating fan is used to assist the heat equalization. The secondary tempering temperature (580+10)C can be adjusted according to the actual hardness of the mold after the first tempering, and the temperature is set as the lower limit for the third tempering.

1.2 Influence of vacuum quenching oil and cooling speed
When the oil temperature is low in the die quenching process, the oil viscosity is large, the cooling capacity is weak, and the hardened die hardness is uneven, the surface is not bright, so the oil temperature should be heated to 50~70″C.Stir the mould before oil, stirring can accelerate the destruction of steam film and enhance the effect of convection heat transfer.And after the mold into the oil to fill nitrogen, mainly to prevent quenching oil in the negative pressure boiling and overflow.At the same time, the purity of quenching oil (such as acid value, residual carbon, water, ion amount) may cause the workpiece to stain.In particular, when the water content reaches 0.03%, it is enough to darken the surface of the workpiece, and when it reaches 0.3%, the cooling speed in the low temperature zone of the cooling characteristic increases, so that the mold with complex shape cracks.After quenching, the section hardness deviation of the die is within the range of 1 HRC, which can be regarded as completely quenched and has very good uniformity.
FIG. 4″9 shows that the cooling rate has a great influence on the quenched tissues.Curve rapid cooling to obtain martensite;Curve obtained martensite + fine – grain carbide;Curve to obtain martensite + bainite + fine carbide, suitable for large and medium-sized mold;Curve pearlite appears, although its temper hardness may be able to adjust qualified, but poor toughness, thermal fatigue crack resistance is low. 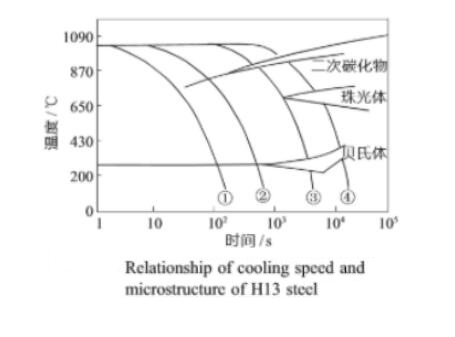 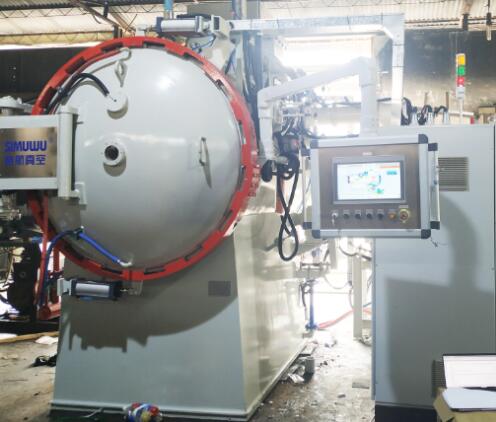