The origin of PIM technology can be traced back to the manufacture of ceramic spark plugs in the late 1920s, but the early development was very slow, and mass production and market did not form. CIMdebindingin the early 1940s and 1940s adopted the Bendix process. The main components of the binder formulation were polyethylene, paraffin and beeswax, and thermaldebindingwas carried out at a slow constant heating rate (1~10K/b). Thedebindingtime was dozens of times Today, once the heating rate is increased, the green body will have serious defects such as cracking and blistering. Wiech believes that the reason for the defects is that the gas expansion work in the green body during the debinding process is greater than the cohesive adhesion energy of the green body. Strivens believes that the thermoplastic binder formulation system cannot provide sufficient cohesive adhesion. He introduced high-strength thermosetting plastic into the PIM binder formulation, and he also applied organic solvent extraction to thedebindingprocess of the thermosetting system in 1883. However, the thermosetting system has shortcomings such as difficulty in forming, which limits its development.

Until the 1970s, Weich developed MIM and applied the organic solvent extractiondebindingmethod to the thermoplastic binder system, which greatly shortened thedebindingtime and greatly promoted the industrialization process of PIM. The organic solvent extractiondebindingmethod will be in the future Continuous improvements and optimizations have been made in the development of PIM, and itsdebindingtime has been shortened to within a few hours. Degree L is considered the mainstream of PIMdebinding. Due to the environmental protection problems caused by the use of organic solvents, people have developed binder formulations for solid polymer solution (SPS) systems that can be extracted with common solvents (water, ethanol). In addition to liquid media, there are solid and gaseous media, such as Siphondebindingusing fine powder, supercritical gas extractiondebinding, etc.
In the 1990s, BASF catalyticdebindingwas also a method that used the gas method to remove part of the binder first. In terms of thermaldebindingprocess improvement, researchers use rate control and other methods to find reasonable process conditions for thermaldebinding[34]. The current popular MIM process is unique in its adhesive system anddebindingtechnology. Commonly useddebindingmethods include thermaldebinding, solventdebinding, siphondebindingand supercritical fluid extraction. Eachdebindingmethod has its own advantages and disadvantages (see the table below). The specificdebindingmethod selected depends on the composition of the binder and the powder Depending on the chemical nature.
The following picture is the debinding and sintering furnace provided by SIMUWU Vacuum Furnace . 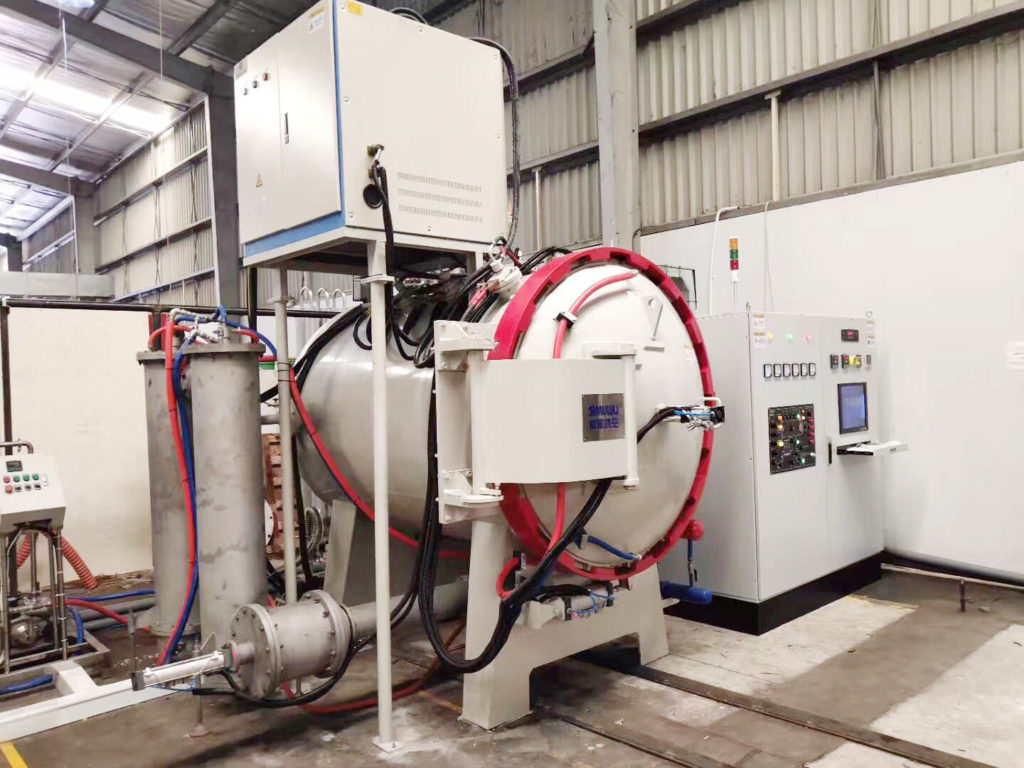 The following table is a comparison of various debinding methods:

The heat debinding is increasingly being re-understood by people. Most experts believe that thermal debinding will still be the mainstream of MIM debinding.Fast debinding speed, no deformation, thicker parts can be produced.