Nanocrystalline material A material consisting of crystals of nanoscale size (1~10nm). Because the crystal is extremely fine, the grain boundary may account for 50% or more of the whole material. The arrangement of atoms is different from the ordered crystalline state and the disordered amorphous state (glassy state). Its properties are also different from those of crystals or non-crystals of the same composition.

Nanocrystalline materials have incomparable performance than conventional materials due to their ultrafine characteristics. Nanocrystalline metal powders are insulators due to the conversion effect of metal insulators due to size. Nanometer powder can be used in thick film technology to prepare long and thin conductive tunnel, and can also be used as the dispersion phase of high dispersion material based on ceramic or polymer which is widely used in high frequency technology field. Porous nanomaterial sintered body has strong activity and is suitable for use as catalyst and high power capacitor.

The preparation mechanism of SPS nanoblock materials
Discharge plasma sintering (SPS) technology is a new hot pressure sintering method, which originated in the United States in the 1930s and spread to Japan in the late 1960s. In the early 1990s, the technology gained renewed interest with extensive research into new materials, especially nanomaterials. In addition to the characteristics of hot pressing sintering, the main characteristics of this sintering method are that each particle inside the sintered body is heated uniformly and the surface of the particle is activated by the discharge plasma generated instantaneously, so it has very high thermal efficiency and can densify the sintered body in a relatively short time.

It is generally believed that pulsed current sintering may have the following densification pathways:
(1) Intergrain discharge (especially at the early stage of sintering) causes instantaneous local high temperatures up to thousands or even tens of thousands of degrees, causing evaporation and melting on the grain surface, and forming a “neck” at the grain contact point, thus directly promoting the sintering of materials;

(2) Under the action of pulse current, the grain surface is easy to be activated, and various diffusion effects are strengthened, thus promoting the densification process;

SPS is a new rapid sintering technology, which has been widely used in the preparation of various materials. The use of pulsed electric furnace and the use of die and head as heating element are its prominent characteristics. The pulsed current can promote the sintering of conductive powder, and its mechanism still needs further study. For non-conductive powders, many experiments show that the densification process is mainly completed by the heat transfer between the die and the head. SPS have a fast heating rate, and the mold and head act as heating elements. The efficient transfer of heat makes rapid sintering of SPS possible. SPS process can effectively inhibit crystal growth and is expected to provide a new way for the preparation of nanoblock materials. At the same time, the material, shape and size of the die and the head directly affect the temperature distribution in the die. By designing the material and shape of the die, the temperature distribution can be effectively controlled, so as to provide an effective means for the preparation of heterogeneous composite materials and complex special-shaped workpiece. 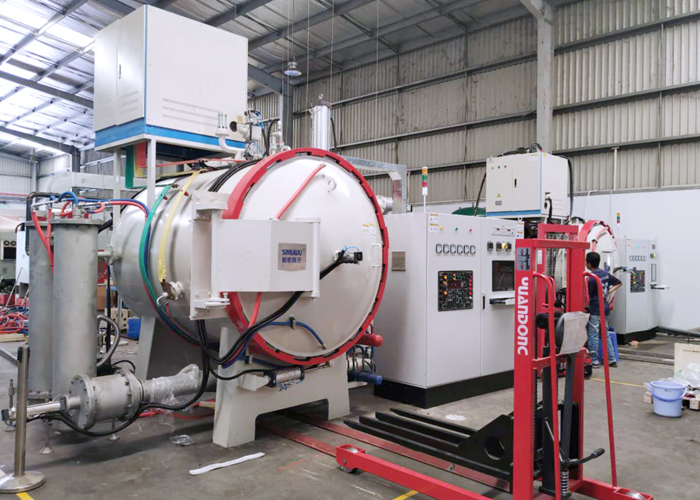