Molybdenum and molybdenum alloys have excellent high temperature mechanical properties, low coefficient of expansion and high coefficient of electrical conductivity and thermal conductivity. Molybdenum and molybdenum alloys are refractory metal materials with great application prospects and have been widely used in many industrial fields such as aerospace, electronics and nuclear energy. Relevant scholars have done a lot of research work on improving the mechanical properties of molybdenum alloy. Although the strength and hardness of the alloy have been greatly improved, the toughness of the alloy tends to decline at this time. In order to give consideration to both, grain refinement is one of the best solutions. Developed in recent years, SPS sintering process using the discharge pulse energy, pulse pressure and joule heat generated transient high temperature field to realize the uniform sintering process, with fast heating, short sintering time, uniform organization and high density controllable characteristics, is considered a fine grains, effective way to improve the performance of traditional material. SPS has the characteristics of activation and rapid consolidation on the surface of powder particles, showing obvious advantages in the preparation of fine grain, ultrafine grain and even nanocrystalline materials.

The increase of sintering temperature and holding time of SPS sintered molybdenum lanthanum alloy will make the density of sintered billet increase rapidly, but it will not increase after reaching the maximum value, and even the density will decrease due to the thermal expansion of gas and impurities. The SEM images of molybdenum lanthanum alloys prepared at different sintering temperatures are shown in the figure. 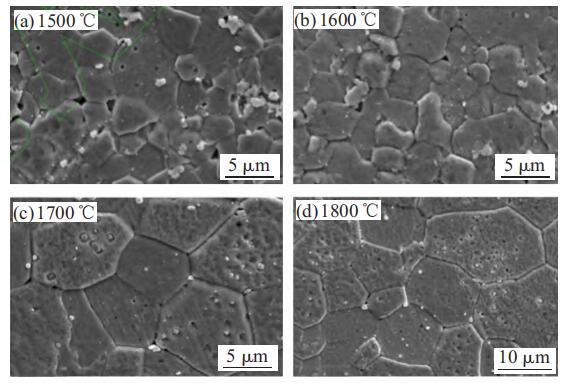 At 1600℃ sintering temperature for different holding time, it is found that with the increase of holding time, the grain of sintered billet does not change much at first, until the conversion to metallurgical bonding, the grain will grow up significantly. And sintering billet microhardness began to increase significantly with mechanical combination into metallurgical combination, later because the grain grew up and fell. Figure 2 shows the SEM diagram of molybdenum lanthanum alloy held for different time at the same sintering temperature.

Can be seen from the picture above (a), heat preservation time is short, powder billet obvious sintering neck, with the increase of holding time, sintering neck disappeared, closed pore density has increased significantly, and the grain size grew up no obvious, as shown in figure (b), and then to heat preservation, it can be seen that grain obviously growing up as shown in figure (c).

Can be seen from the above experiments, compared with the traditional sintering atmosphere, fine grained alloy on the SPS can be very good, in the process of sintering, avoid grain growth, which is not possessed by other process, and SPS sintering get better sintering billet density, mechanical properties, better for the preparation of new materials offer a more broad application prospects.