The brazing property of diamond is poor, and the main difficulties are as follows:
1. Most commonly used solder is difficult to be wetted or cannot be wetted.
2. The linear expansion coefficient of diamond is lower than that of most metal materials, and it is easy to change its properties under the action of brazing thermal stress and surrounding medium.
3. The brazing temperature is limited by the graphitization transition temperature.

Many scholars have studied the wettability of diamond in detail with graphite as a substitute. The results show that the brazing property of diamond is very poor under non vacuum condition.

Because the direct brazing of single crystal diamond is very difficult, diamond and other metal powders are chosen to be pre manufactured into powder metallurgy composite in industrial production. The brazing of these composite materials is relatively easy.

The most widely used method is to press and sinter diamond “cutting disc” by powder metallurgy, which is easy to braze.

The solderability of the cutter head and the matrix mainly depends on the elements of the bottom layer of the cutting disc. At present, there are mainly cobalt base, tungsten base, copper base, iron base, tungsten carbide base, prealloy base, etc. in the formula of cutter head, but the bottom layer of cutter head is mainly composed of Fe, Cu, 663 bronze, Zn, Sn, CD, WC, W2C, Al, Pb, C, P and special copper alloy. When the bottom layer is not designed separately, there may be Ni, Mn, Cr, Ti, Zr, V, Mo, Co, B, Ag, be, Si, W, Bi, B4C, CBN, Al2O3, SiC, Cr2O3, TIH, tic, tin, Si3N4, hBN, MoS2 and other components.

Among the above components, Pb and Bi are easy to cause hot cracks in the solder joint; Sn, P and CD are easy to produce brittle fatigue sources; the formation of strong carbides originally affects the solder adhesion; Pb and C affect the wettability. It should be pointed out that Pb and free C have a fatal effect on the solder joint: during the soldering process, they form the solder slag which seriously destroys the wettability and solder flow, resulting in the failure of the cutter head to weld; on the other hand, when the lead content reaches 3% – 5% (mass fraction), the brittle phase formed by lead and the hot crack source generated by the grain boundary effect greatly reduce the strength of the solder joint, or even destroy the cutter head.

Polycrystalline diamond (PCD) is composed of many fine single crystals sintered at high temperature and pressure. The grains in the polycrystalline are arranged in disorder, and their hardness and wear resistance are relatively close in all directions. Meanwhile, they have good fracture toughness. Therefore, different shapes can be made according to different use conditions.

Polycrystalline diamond and composite chips have been widely used in the manufacture of metal cutting tools, oil bits, geological drilling bits, stone processing tools, etc. Due to the low brazing temperature allowed by pcdh and PDC, and the poor brazing performance of tungsten carbide and other materials, the brazing performance of this kind of products is not good, but brazing is one of the key technologies for manufacturing this kind of products. The main problems of PCD and PDC brazing are wettability, joint strength and brazing temperature.

Because the materials of diamond sinter (the general name of cutter head, PCD and PDC) in diamond tools are very different, even the same formula of the same manufacturer is also changed, which brings great difficulties to the selection of solder and flux. There are often many differences in brazeability of different batches of cutter heads.

The brazing surface of PDC is tungsten carbide, and the brazing property of YG is OK, but due to the limitation of brazing temperature, the brazing wettability of PDC is not as good as that of cemented carbide. PCD and cutter head often contain Cr, Ti, Pb and other hard to solder metals, and their solder wettability is not good.

In the industrial production of diamond tools, the main methods to connect the diamond head to the steel substrate are as follows: deposition, integral hot pressing and sintering, separate manufacturing and mechanical inlay or welding.

Diamond deposition technology rose in the 1980s. It has been applied in optics, acoustics, electronic technology, heat conduction, mechanical cutting tools and other fields, but the application of small saw blade is still in the stage of technology development.

The whole hot press sintering process is generally used to manufacture small size saw blades. Its technological feature is that the matrix metal is directly sintered on the steel substrate. Because of the great difference of linear expansion coefficient between steel matrix and matrix material, thermal stress is produced during the cooling process after sintering. This part of internal stress is superimposed on the shear stress during the use of saw blade, which affects the service life of saw blade.

Brazing is the most widely used technology in diamond tool manufacturing. Because the diamond head is produced by powder metallurgy, the brazing characteristics of this kind of tools are similar to that of cemented carbide. The brazing of single crystal diamond is mainly carried out under vacuum condition.

In fact, the brazing of diamond cutter head and matrix is the brazing of steel and P / M matrix. The composition, structure and structure of matrix substrate are the key factors affecting the brazing performance. Titanium, chromium, lead, zirconium and 663 bronze powder in the substrate have adverse effects on brazing. 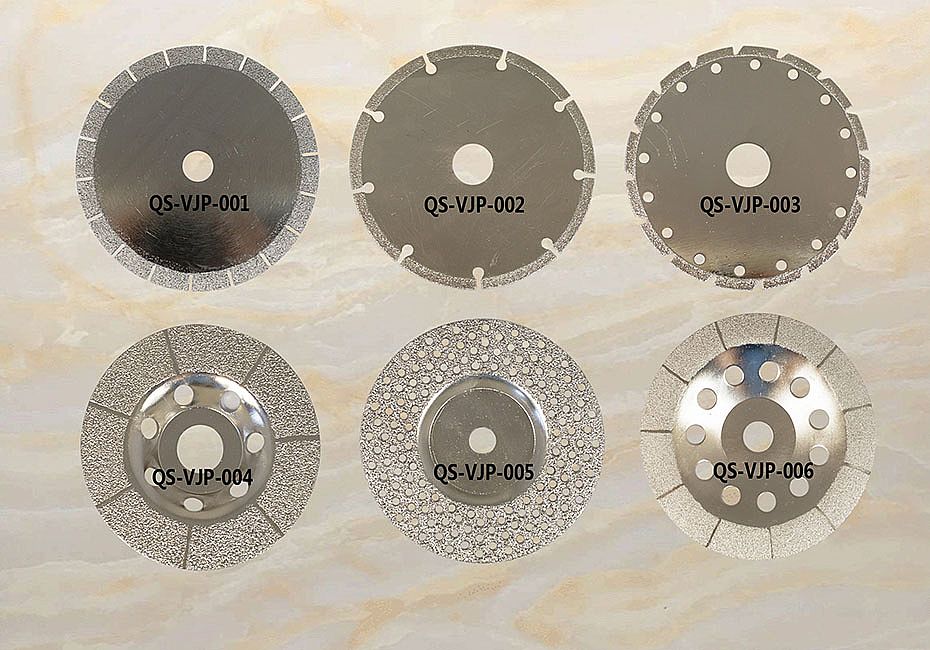