As a green environmental protection technology, vacuum heat treatment has many advantages after years of development, especially the wide application of high-pressure gas quenching furnace
Pollution-free;
Large amount of primary charging;
Energy saving;
Less and no oxidation and decarbonization;
High temperature control accuracy;
High degree of automatic control, little influence of human factors on the operation process, etc,
It has been successfully applied in the heat treatment of moulds in our factory. But at the same time, there are also many problems in the production. These problems involve a wide range. Through analysis, the measures to solve them have been formulated and some experience has been obtained. The following is a review and summary of the application of vacuum heat treatment in tooling and analysis of common problems and solutions.

1、 Vacuum quenching of small cutting tools
Small tools with diameter less than 6mm can not be directly heated and quenched in the salt bath due to deformation and easy falling in the salt bath, so it is necessary to make a special tooling and install a sleeve for salt separation and heating. Although the sleeve is pre vacuumized, the degree of pre vacuumizing, the oxidation state of the sleeve itself, and the large temperature fluctuation in the salt furnace will still cause the problems of oxidative decarburization and poor hardness stability. The use of automatic control of the vacuum furnace heating quenching, a good solution to these problems, quality stability greatly improved, and a large amount of charging, time-saving and labor-saving. But there are some other problems in vacuum quenching

1. Adhesion of tools after quenching
For slender rod-shaped small cutting tools, in order to prevent heating deformation, the charging requires natural vertical. In production, the method of inserting a sleeve is adopted, that is, dozens of cutters are inserted into a sleeve in a straight and neutral way. In order to prevent the tool from skewing, the tool in the sleeve must be close together. In this case, the phenomenon of tool adhesion often occurs after vacuum quenching. In serious cases, it is difficult to break the tool. The cause of adhesion is due to the evaporation of chromium and other alloy elements in vacuum, and the adhesion of evaporated gaseous metals on the tool surface, which not only pollutes the surface and affects the luminosity, but also causes problems such as low hardness and soft spots on the workpiece surface.

In order to reduce or prevent adhesion, it must be noted that when the temperature is above 850 ℃, the partial pressure of nitrogen shall be refilled in time to prevent such phenomenon by reducing the vacuum degree. For this dense arrangement, the partial pressure of nitrogen should be kept at 800-1000pa to make the quenched tool bright without adhesion.

2. The tools of vacuum quenching are not resistant to tempering and have low hardness
There is no secondary hardening after tempering at 560 ℃ for domestic vacuum furnace and 6 bar common high-speed steel tools. Sometimes, the hardness even decreases, which reflects that the tool is not resistant to tempering. In order to prevent the hardness from decreasing during tempering, the lower limit temperature is 540-550 ℃.

The cooling rate of high-speed steel tool is a very important factor in the heat treatment process. The ideal cooling rate is “fast” to the equilibrium state that can make it reach in the austenitizing temperature can be “frozen”, and the steel in this state will have the best toughness and hardness by proper tempering. However, in the actual quenching, there is a tendency to re precipitate the carbide dissolved in austenite, especially in the range of 100-800 ℃, the precipitation rate reaches the peak value. The precipitation of hypereutectoid carbide makes the carbon and alloy elements in the matrix poor, thus reducing the potential energy of secondary hardening of steel during tempering, and reducing the hardness and toughness of steel. French high speed steel company has carried out experimental research on the influence of different cooling rates between 1000-800 ℃ on the final hardness. It is believed that to avoid the loss of hardness, cooling must be at least 7 ℃ / s, at this time, the quenching pressure should reach 10 bar, and the blowing direction, circulation and cooling mode of gas in the furnace should also be set reasonably.

The heating in the vacuum furnace mainly depends on the way of radiation heat transfer, with little convective heat transfer, so the cutter near the heating element is faster than the “back shade” (not directly facing the side of the radiator), the corresponding holding time under the quenching heating temperature is different, and the dissolution degree of carbides is different, resulting in different red hardness. In addition, the air flow from the 360 ° direction to the periphery of the load is faster than that from the center, which further aggravates the difference of red hardness. In order to solve this difference, on the one hand, properly extend the quenching and heat preservation time to ensure that the cutting tools in all parts of the furnace are burned through, on the other hand, the cooling mode and cooling speed of the vacuum furnace itself also have an impact, such as the starting mode of the cooling fan, the flow direction of gas in the furnace, etc. At present, in addition to 360 ° circle cooling mode, the cooling mode of the gas in vacuum furnace also has the upper and lower square cooling mode. When the upper and lower square cooling, the air flow passes through the load, which is beneficial to the small workpieces placed in multiple layers. Therefore, the corresponding furnace type should be selected according to the characteristics of the workpiece.

In order to avoid quenching deformation of the workpiece, the charging method is also very important. In principle, the gas should flow evenly through the workpiece, and the workpiece cannot be deformed due to its own weight or mutual extrusion.

4、 Influence of material of vacuum furnace body on product quality
As the high-speed steel is quenched at high temperature, the performance of furnace body insulation material has a great influence on the service life of the equipment and the production cost, as well as the effect of heat treatment and product quality.

In 2012, we overhauled the vacuum furnace and replaced the furnace liner, heating elements and other components. Due to the neglect of the quality of the furnace liner carbon fiber, the hardness of the tools quenched and tempered according to the normal process remained high after maintenance. The hardness of the tools was reduced to 63-66hrc after gradually raising the temperature and tempering to 600 ℃, but the hardness of the tools was only 58-60hrc when the batch was sent to the user. The reason of hardness difference between before and after analysis again, it is realized that the original high hardness after quenching and tempering is only limited to the surface layer, the machining after heat treatment has worn off the high hardness layer on the surface, and the real hardness inside the tool is not high. As for the high hardness of the surface, it is due to the volatilization of carbon in the carbon fiber of the new furnace. During the high temperature heating process, the carbon atoms penetrate into the surface of the cutting tool, resulting in the false appearance of high hardness. Due to the neglect of the influence of the equipment and the adoption of the wrong technological measures, waste products are produced.

In addition, the carbon fiber volatilized in the furnace will also pollute the heating elements. In serious cases, the heating elements will be discharged and sparked. Once the sparking arc strikes the workpiece, it will cause local burn on the workpiece surface and affect the quality. At that time, our Cr12MoV die plate had been burned three times. This kind of carbon fiber pollution has been going through half a year of volatilization and air extraction before slowly disappearing. Therefore, the carbon fiber material with high density, good quality or protected by some surface treatment process should be selected when determining the furnace lining.

Vacuum heat treatment is a clean, energy-saving and advanced heat treatment technology, but some problems still need to be paid attention to in practical application. Only by constantly mastering the law, taking measures, developing the advantages and avoiding the disadvantages, can we give full play to its unique advantages. 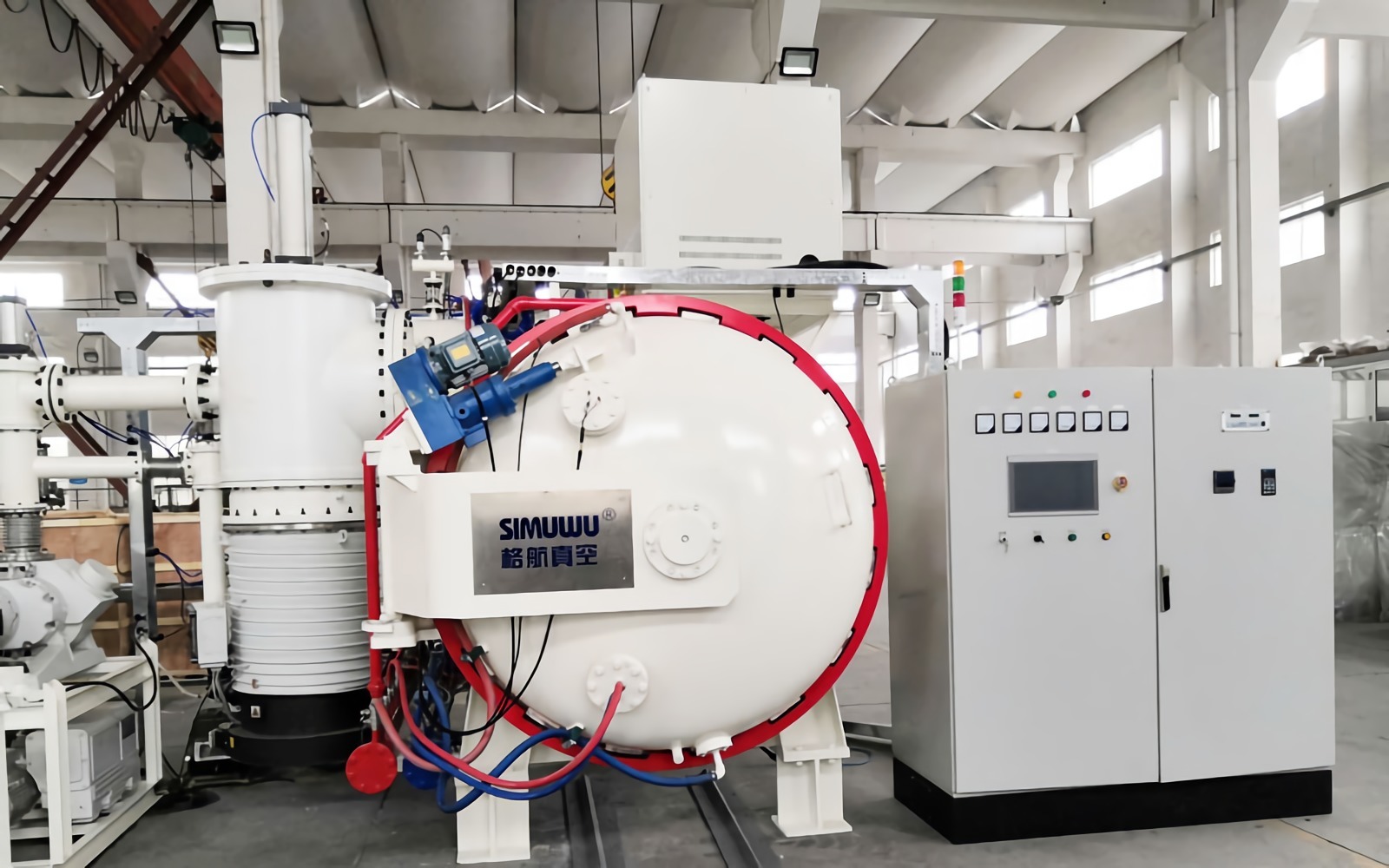