34CrNi3MoA steel is a high-strength alloy steel widely used in the steam turbine industry. After quenching and tempering, it has good comprehensive mechanical properties. Especially after nitriding, it is often used to manufacture important parts with high strength and good plasticity, such as gears. , shaft and other components.

The chemical composition of 34CrNi3MoA steel used in this paper is shown in the following table. All experiments in this paper were carried out in a PIT pit-type gas nitriding furnace.

2.1 Kinetic curves of conventional nitriding and nitriding with rare earth catalyst at 510℃ 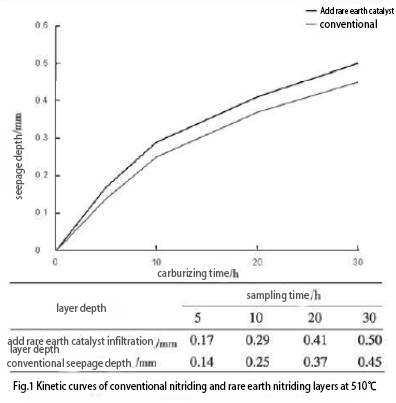 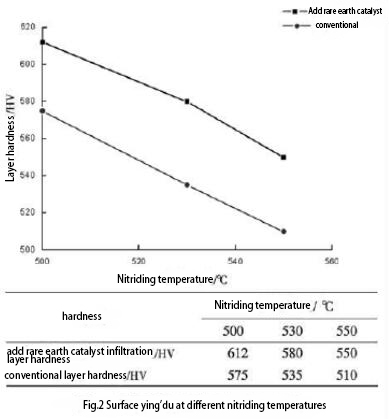 2.2 Influence of different nitriding temperature on the hardness of nitriding layer

Due to the relatively strong affinity between rare earth elements and nitrogen atoms, a “Coriolis air mass” with rare earth elements as the core is formed in the matrix. At the same time, it is beneficial to the diffusion to the periphery, especially to the intragranular diffusion, which increases the diffusion coefficient, which can effectively increase the depth of the nitrided layer.

The 34CrNi3MoA steel was subjected to rare earth gas nitriding using the process parameters shown in Fig. 3, and the furnace was installed at room temperature. #, 2#, 3# samples, check the surface hardness, nitriding layer depth and brittleness of the samples. 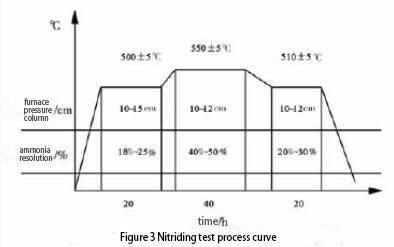 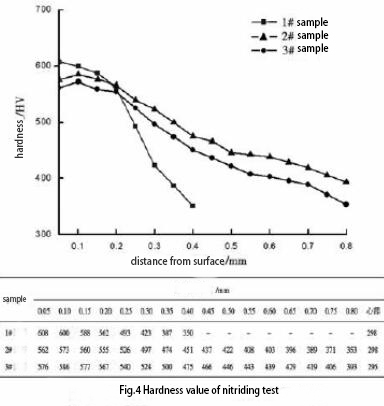 1) The method of using rare earth catalyst in the nitriding process of 34CrNi3MoA steel can effectively improve the surface hardness of the infiltrated layer by about 40~50 HV, and at the same time, it can increase the infiltration rate by 10%~20%, greatly shorten the process time, and effectively reduce the production cost.

2) The three-stage nitriding process of 34CrNi3MoA steel with rare earth catalysts can meet the technical requirements of nitrided layer ≥0.7 mm and surface hardness of 550~750HV.

3) The nitriding process method can be promoted as a new process for nitriding 34CrNi3MoA steel.

Selection of vacuum nitriding equipment: RVN-T series gas nitriding furnace produced by SIMUWU is an excellent choice for completing this type of process. Its process performance can fully meet the needs of such hot processing, with good temperature control accuracy, temperature uniformity and gas quenching uniformity.