Spark plasma sintering (SPS) is a rapid sintering method that uses axial force and pulsed current to heat and solidify powder at a high speed under low atmospheric pressure. This heating method can apply a very high heating temperature, can greatly increase the density (see the figure below), and keep the inherent properties of the nano powder in its completely dense product. SIMUWU brand SPS vacuum sintering furnace is widely used in laboratories and scientific research institutions. Among them, SPS-1 and SPS mini are very popular models, which are convenient for various proofing research.

The basic structure of the SPS system is shown in the figure below. SIMUWU brand SPS vacuum sintering furnace mainly includes vertical pressurization system, water cooling system, atmosphere control system, pulse current generator and controller. The powder materials are stacked in the sintering mold cavity. Under the combined action of the axial pressure and the pulse current, the temperature rapidly rises to 1000~2500℃ higher than the ambient temperature, so that a high-quality sintered body can be produced within a few minutes . Shanghai Gehang Vacuum can provide customized services according to customer requirements. 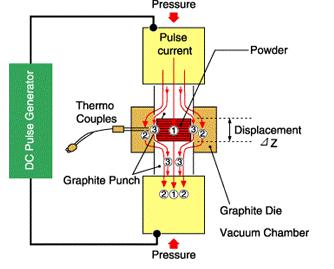 The SPS process is based on the phenomenon of electric spark discharge: high-energy and low-voltage pulsed currents instantly generate high temperatures between local particles, and spark plasma discharge occurs, thereby producing the best heat and ionization diffusion. SPS sintering temperature ranges from low temperature to over 2000°C, which is 200 to 500°C lower than conventional sintering. The sintering mechanism of SPS currently mainly includes the following processes:

Whether or not plasma is generated has not been directly confirmed by experiments. Therefore, there is no conclusive evidence that plasma is generated in the SPS process. The occurrence of plasma discharge is still controversial, but it is generally believed that the discharge phenomenon will occur at the microscopic level.

Current research believes that when pulsed current passes through metal materials, a large number of free electrons with orientation drift will be generated. The drifting electron group frequently strikes the dislocation in direction, which will produce an electronic wind force similar to the applied stress on the dislocation segment, and promote the movement of the dislocation on its sliding surface. At the same time, when the pulse current is applied, the electrical energy, heat and stress are instantaneously input into the material. The random thermal motion of the atom obtains enough kinetic energy to leave the equilibrium position under the instantaneous impact force of the pulse current. The diffusion ability of the atom is strengthened and the dislocation is easier Slip and climb, thereby improving the plasticity of the metal.

Joule heating caused by the passage of electric current through the particles helps to weld the particles under mechanical pressure. The intense Joule heating effect generated on the surface of the conductive particles usually reaches the boiling point, leading to local evaporation or cleaning of the powder surface. SIMUWU provides reliable DC power supply to ensure product quality, reliable use, and cost-effective DC power supply for SPS sintering furnace.

During the sintering process, pulsed current will generate: spark plasma, spark impact pressure, Joule heating and electric field diffusion effects.
Due to the traditional electric sintering process, the surface of the powder particles in the SPS process is easier to purify and activate. At the micro level, atoms, dislocations, and vacancies are more prone to movement, and the material is more prone to deformation at the macro level. In a short time, it is easier to obtain a high-quality sintered body at a lower temperature. The figure below illustrates how the pulse current flows through the powder particles in the SPS sintering mold.

The SPS process is an electric sintering technology, which applies the pulse current from the pulse generator to the particle powder (see the figure below). In addition to the factors that promote the above sintering, the effective discharge that occurs between the powder particles also promotes 了sintering. The high-temperature sputtering phenomenon generated by spark plasma and spark impact pressure eliminates the adsorbed gas and impurities present on the surface of the powder particles. 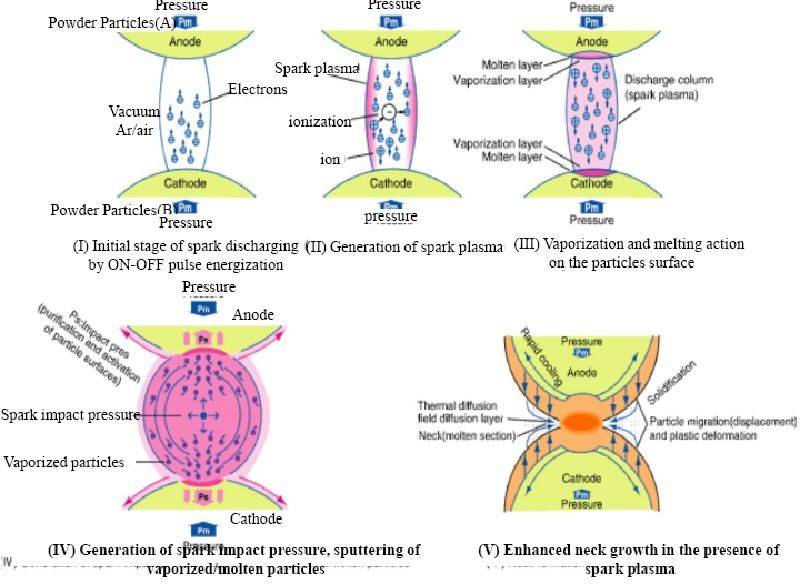 When spark discharge occurs in the gap or at the contact point between material particles, a local high temperature state (discharge column) of tens to tens of thousands of degrees Celsius is instantly generated. This leads to evaporation and melting on the surface of the powder particles during the SPS process, and the formation of a “neck” around the contact area between the particles. The figure below shows the basic mechanism of the spark plasma forming the neck.

Figure a shows the behavior of the initial stage of neck formation due to sparks in the plasma. The heat is immediately transferred from the center of the spark discharge column to the surface of the sphere and diffuses, so that the intergranular bonding part is rapidly cooled. As shown in Figure b, which shows several necks, the pulses cause spark discharges one after another between the particles. Even for a single particle, the number of positions where necks are formed between adjacent particles increases as the discharge is repeated. Figure c shows the state of the SPS sintered crystal boundary, which undergoes plastic deformation after the sintering progresses further.